Souq Jara provides an opportunity for Jabal Amman to highlight its charm by showcasing some of Jordan’s finest retailers in outdoor booths as they sell unique souvenirs, handicrafts, antiques, paintings and other items. In addition, the festive atmosphere of the Souq provides for a fun family outing with live music and entertainment, games and activities for all ages. 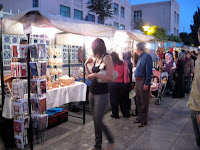 Beginning the 14th of May and running until the end of August, a wonderful collection of local Middle Eastern craft vendors come together each Friday to show their wares in one of Amman’s oldest neighborhoods and along one of its oldest streets. Once again, From the Earth is proud to participate in the annual “Souq Jara” festival in historic Jabal Amman. As you enjoy the day at the Souq, stop by From the Earth’s booth to see our fine selection of Olive Wood products, jewelry, beautiful handmade cards, stoneware, along with spectacular photo cards and calendars depicting breathtaking Jordanian scenery.

Jabal Amman is one of Amman’s most celebrated neighborhoods boasting many distinguished past and present residents such as: the Late King Talal and his family, including Prince Hussein who later became King Hussein of Jordan; General John Bagot Glubb, known as “Glubb Pasha”; along with many other well-known Jordanian personalities, politicians, diplomats and business leaders whose homes may still be found well-preserved.

In July 2004, the residents of old Jabal Amman established the Jabal Amman Residents Association (JARA) to help maintain and preserve its unique identity and ethnicity. The JARA believed that since Jabal Amman has played a significant role in the history of Jordan, and specifically in the New Hashemite Kingdom, that the neighborhood should be promoted.

SOUK JARA is supported by Greater Amman Municipality. Visit the JARA website at http://www.jara-jordan.com.
at 12:15 PM