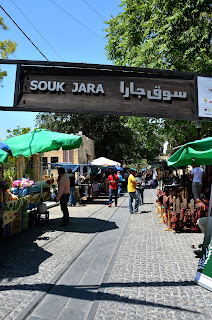 For Jumana, it was just another Friday in Amman. Off from school for the summer, she got up early to accompany her mother to Souk Jara. Jumana's mother works for From the Earth, and Jumana sometimes tagged along on Friday mornings to help her mother sell at the bustling market.

Souk Jara is always fun - the sun is shining, you're outside in the cool morning breeze, and of course, you always get to meet interesting new people from around the world.

So imagine her curiosity when a well-dressed couple, accompanied by a military agent and two bodyguards approached her booth. The couple were young and charming, and very friendly. The wife was elegant yet poised, and she had a clear sense of style.

"Where are you from?" Jumana's mother asked.
"Luxembourg."

Jumana and her mother continued to chat away with the new visitors as the wife admired the olive wood jewelry that their booth had to offer, finally settling on a beautiful pair of earrings.

A simple, pleasant encounter. Jumana didn't know much about the foreign country of Luxembourg, so when she went home she logged onto the Internet to learn more. Imagine her surprise when she discovered that those friendly strangers were, in fact, Prince Louis and Princess Tessy of Luxembourg.

Royalty. Jumana had met and interacted with real royalty.

"I've never met a princess before!" she recounted excitedly! "And they were so nice and down-to-earth! I wish I had my camera!"

It just goes to show that everyone should check out Souk Jara. You never know who you'll end up rubbing elbows with!
at 3:37 PM